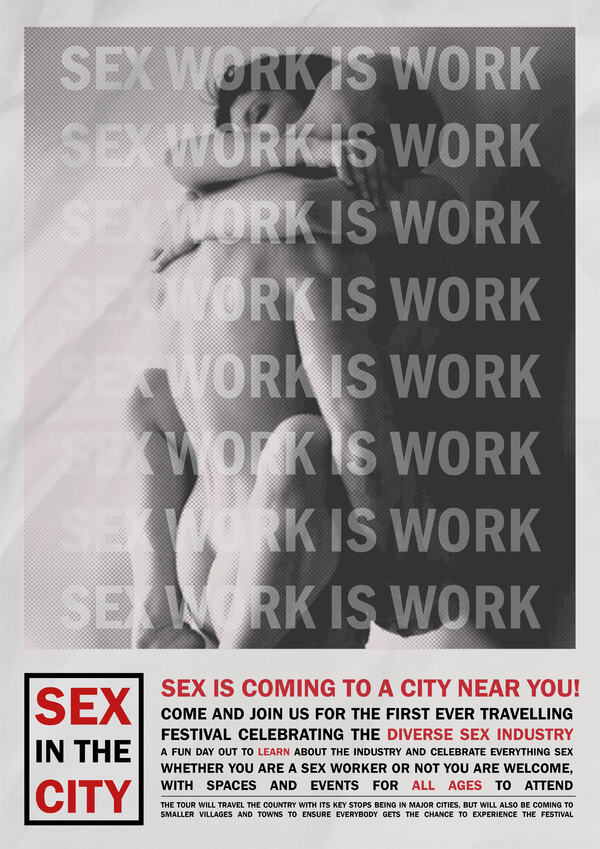 Welcome to ‘Sex In The City’.

A UK based travelling festival with the central objective of supporting and uplifting sex workers and de-stigmatising the industry. The festival is not asking you to love the sex industry, but instead offers an opportunity to be educated and open a conversation of how sex work operates within the public realm.

A lot of people consider sex work to be one of the oldest professions, however it is still viewed in incredibly black and white terms, with uneducated assumptions guiding modern discourse. When researching, it was clear that the majority of these assumptions are being created by the media, with many only associating sex work with the individuals that work on the streets. When in fact, the sex work industry is a hugely diverse community, consisting of various avenues and a spectrum of identities.

At each stop of the festival a mini sex city takes over public space, creating engagement with a variety of demographics and offering a place for sex workers to come together. In its creation, I have used various avenues of research and theory to inform my design decisions and in turn produced a ‘Whores Manifesto’ which acts centrally within the festival. The various spaces have different functions, from spaces to protest, watch performances, sex education, to experience workplaces of sex workers, space exclusively for sex workers the list goes on. To visualise the festival, I have chosen to show it in Manchester, where it has taken over Piccadilly Gardens.

So come explore Sex In The City.