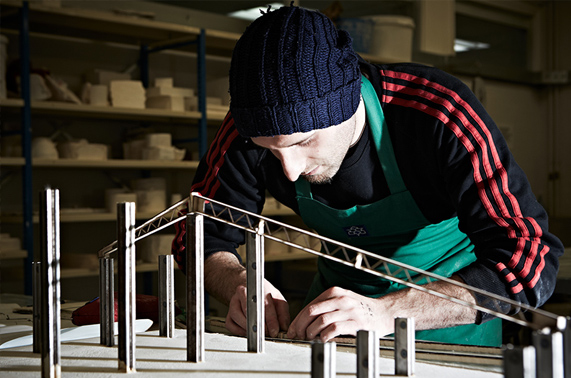 We are global Mancunians

In our creative community, there are over 300 international students, from more than 50 countries, working with specialist academic staff from across the world in the heart of a vibrant and multicultural city.

Our alumni and industry links spread across the globe, and offer our students opportunities to work with international partners, and develop exciting careers whether that’s in Manchester or further afield.

More About Us
Reputation

We’re recognised as top of the world’s top architecture school (QS World Rankings 2017) and you can see the work of our alumni across the globe as The Reichstag Dome, Berlin (Norman Foster) and The Highline, Chicago (James Corner).

Our students and alumni benefit from our international connections, with recent student project including collaborating with Fine Art students to produce site-specific installations for FAVOURITEN festival in Dortmund, and working in collaboration with the Faculty of Architecture at The University of Lisbon to create new structures and renovate existing features.

My favourite project on the course was my final year project based in Lisbon, Portugal. We enjoyed an eventful and insightful trip to the beautiful city and the entire studio produced excellent work with a contextually conscious and realistic, but poetic approach Samuel T Stone, MArch, 2017 Graduate

Find out more about our courses
The city

A vibrant city to call home

Located just two hours by train from London, Manchester is often referred to as the UK’s ‘second city’, with links to the rest of the UK by train and an airport located only 20 minutes outside the city centre.

Manchester has one of the largest student populations in the UK with over 100,000 students living and working in a city where over 200 languages are spoken. Its multicultural nature is evident in institutions such as the Centre for Contemporary Chinese Art, Instituto Cervantes and Alliance Francaise. 42% of those who study in Manchester choose to live here after graduation, including those who work in the city’s range of nationally and internationally renowned architecture practices.

Our city is renowned for being home to two football giants, Manchester United Football Club and Manchester City Football Club, as well as our rich musical heritage with The Smiths, Elbow and Joy Division being just some of the acts to emerge from our home city.

Our campus is based just 15 minutes’ walk from the city centre, and is along one of the busiest bus routes in Europe, meaning that it’s easy to reach Manchester’s bustling nightlife, culinary and cultural scenes.

Living and studying in Manchester places you at the centre of one of the world’s most charged cities, on one hand a culturally vibrant and cosmopolitan city, which you can never tire of, and on the other an intellectually thriving city. Benjamin Carter, 2017 Graduate

Your home on campus

International students at Manchester School of Architecture can qualify for guaranteed accommodation in halls at The University of Manchester.

These halls offer a safe and welcoming environment for you to live and study alongside British students in close proximity to arts and cultural scenes, sporting events and nightlife of Manchester City Centre.

With over 8000 rooms, from modern flats to traditional college-style catered halls of residence, there are options to suit a range of budgets and preferences with many halls having their own social areas, libraries and sports facilities. However, wherever you stay, you are assured privacy, as all rooms are single occupancy, with specially adapted rooms available for students with disabilities.

Moving to Manchester to study MA Architecture and Urbanism at Manchester School of Architecture was also my first experience living in a foreign country. It eventually became just like home Sanjana Malhotra, 2017 graduate, from New Delhi

A supportive and welcoming environment

The Student Support and Advice teams at The University of Manchester are here to help you with finding academic support, managing your finances, wellbeing and much more.

There are also sessions available to help you with developing your academic English, for essays and assessments, while The University of Manchester’s Student Immigration Team are here to help provide immigration advice to international students.

Find out more how we can support you
Campus Activity

As well as societies about activities, hobbies and sports, there are societies for members of The University of Manchester and Manchester Metropolitan University’s international communities.

You will have access to both Students’ Unions, and will be able to benefit from societies such as The Bulgarian Society, Chinese Society, Latinos Society, Middle Eastern and North African Society (MENA) to name just a few.

In addition, The University of Manchester’s International Society, based on Oxford Road, has over 3,000 members and holds over 40 classes a week as well as social event such as cultural nights and trips around to UK, to help you make the most of studying and living in Manchester.

Find out more about The University of Manchester International Society
Applications

Applying to Manchester School of Architecture

Details on how to apply for our courses and the latest fees information can be found on the individual courses pages, along with academic and English Language Entry requirements.

When applying for our courses, many international and EU students use a recruitment consultant or education advisor based in their home country to help them. Manchester School of Architecture works with a number of education advisers worldwide and you may and that we have one in your country. They will be able to tell you more about MSA and how best to present yourself in a way that will interest admissions tutors and some will offer you assistance with your visa and predeparture briefings.

Find out more about our courses
Your Finances

Our international fees are competitive and are fixed for the duration of your study, and the cost of living in Manchester is lower than in London and many other cities.

To help with financing your studies, The University of Manchester and Manchester Metropolitan University, offer a variety of bursaries and scholarships for international students seeking financial support assistance with their studies.