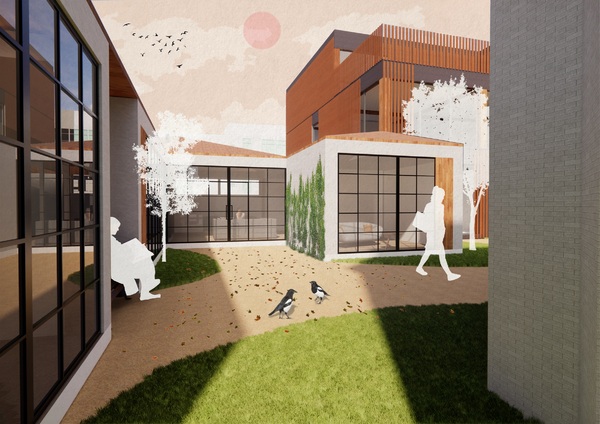 In response to our PRAXXIS brief, to design a Feminist School of [insert issue], I decided to focus on abortion rights and the Pro-choice movement. Through programme development, my scheme broke down into two distinct buildings both with different initiatives. The first was The Feminist School of Choice, aimed at providing an inclusive and accessible facility for women and girls to access free classes on sexual health, consent and reproductive rights. The second was a therapy centre which offered a safe space for women seeking professional advice on abortion free from judgement.

Throughout this project, I developed three key design drivers; domesticity, safety and sustainability. The idea to incorporate domestic design features was inspired by a network of buildings located around the UK called ‘Maggie Centre’s’ which provide support for cancer patients. The concept came from a woman, who herself died from cancer, who believed that architecture could have a healing and positive effect on those who come into contact with it. This ethos is something that I tried to uphold throughout my own design process of the therapy centre. My second creative driver was based around safety and protection from harassment, which is an issue that was important to consider when designing a building centred around abortion rights given its extreme opposition of the Pro-life movement. Finally, my last design driver was sustainability which I believe should be the focus of all major construction projects moving forward. Given the critical and current climate crisis we are in, I believe that future architects have a huge responsibility to help lead the sustainable movement by designing the greenest and healthiest buildings.