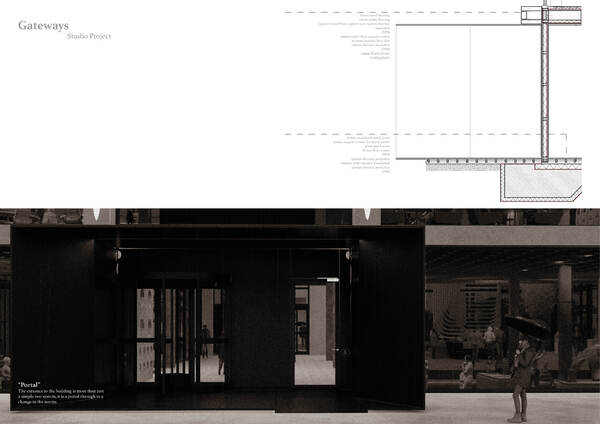 Throughout the year my architectural direction has refined into an ideology that will be transferred with me into future jobs. The main aspects of my position revolve around the ideas of social sustainability and deep analysis into the continuity between the proposal and the surrounding vernacular.

Within this project the programmatic development centres around internal regrowth, to revive a dying town back to the prosperity felt during the industrial revolution. The buildings programme is centred around allowing small businesses to come and utilise the facilities in order to produce any product of their choosing, at fractional costs compared to hiring and renting their own workshops. Within the building exhibition and shops allow them to promote and sell goods in order to raise capital in the hope that the high-street will once again be populated with these small businesses, redefining Accrington as a creative hub in a regenerative process.

Using the idea of gateways as devices, due to the regeneration already planned to the towns existing gateways, the buildings form and exterior begins to take shape, connecting the building with the town around. Aesthetically the building follows a similarly sensitive story with the main thoughts being to blend the new with the existing language on display with modernisation- to signify the direction in which the town needs to and will take. The regular geometric forms of the Broadway façade mirror the forms seen in the vernacular of Accrington. While the large colonnades are a nod to the past and the current town hall with its striking column formation.

These modernised features and programmatic sensitivity give the building its own identity within the heart of a once revolutionary industrial town and will serves as catalyst for its regeneration and climb back to prosperity.