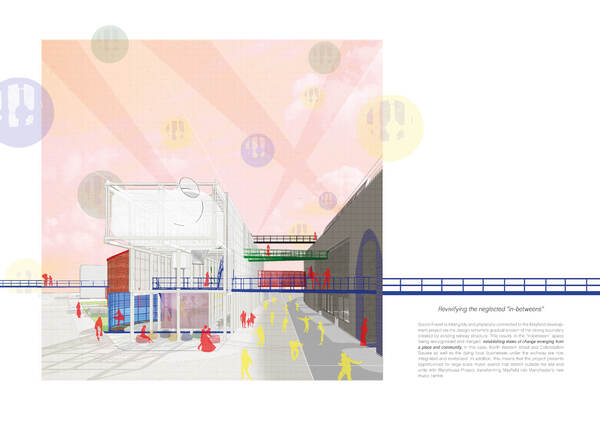 Beat as the Pulse- Composing space for sound and architecture to thrive in order to create diverse experiences and encourage interaction, thereby connecting the dots between Mayfield, Ardwick, and the rest of Manchester City through the envisioned living social fabric. Sound Forest creates ''a state of change'' in Mancheter City.

Mayfield has always been a neglected neighbourhood, a place of transition, where people come and go. It is not a destination for anyone. It does, however, have the unique sounds of a speeding train, the Medlock River, dense greenery, and the footsteps of those who use it as a passage to the city centre. Sound Forest aims to amplify those sounds and harmonize them using the proposed system of passage’ as a ‘musical notation, to tune in ‘the Sound of Mayfield’ back in harmonizing with Manchester’s rhythm. The colour-coded pathway alludes to the approach of a new community park and performance spaces that are permeable in such a manner that they enliven the street and entice you to wander through or linger within the different atmospheres that celebrate a range of sounds. This active system is presented not only as a formal system but also as a living social fabric where collaborative cycles through the new frame structures and the old archway infrastructure provide spaces for promenade and experiencing city's soundtrack in poetic ways.