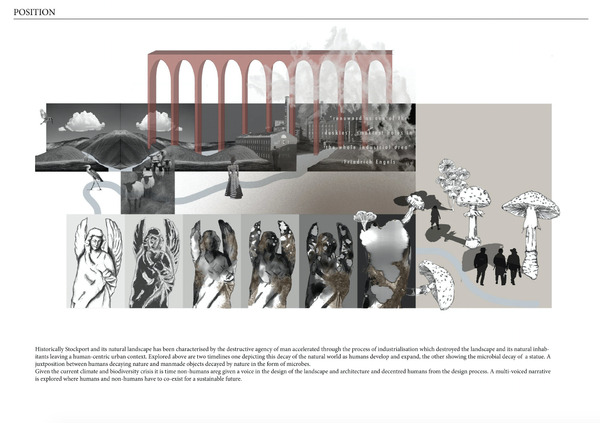 This project reinterprets the architectural design process as a symbiotic relationship between humans and non-humans through utilising microbes as co-designers. Further, the materiality of Stockport, Manchester is reimagined via the exploration of mycelium as a construction material in the development of a mushroom farm and mycelium production line. Historically Stockport and its natural landscape has been characterised by the destructive agency of humanity accelerated through industrialisation, human growth was at the expense of the natural world and its inhabitants. For too long the urban context has been dominated by a human-centric ideology and therefore its time to give the natural world an equal voice.

Exploring how non-humans should have an integral role in design bacteria and mold was allowed to dictate the massing within the site of Stockport. Slime mold was used to develop a circulation strategy through the programme. As a result, a multi-voiced narrative between humans and non-humans is created and a design evolved which listened to other voices rather than humans.

Climate change is the fundamental design problem of our time: buildings are hugely complicit in the crisis. 11% of buildings carbon emissions consist of those associated with construction and building materials. It’s evident construction materials need to be reimagined for a sustainable future. Mycelium is investigated as a building material both structurally, thermally and aesthetically redefining the urban context of Stockport which consists greatly of brickwork. Mycelium used in construction means there is less reliance on fossil fuels, which is required in production of many other materials such as bricks. Further, less to no embodied energy is required for the fabrication of mycelium bricks, there is massive reduction in building waste, and it is 100% biodegradable. 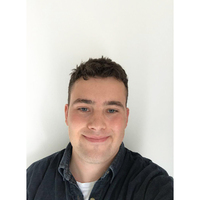