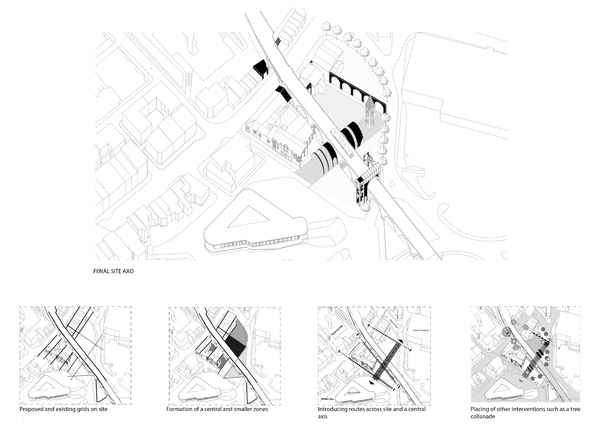 The thesis project is based in Accrington which explores the Scale Conflict caused within the town post industrialisation. The thesis starts by exploring the scale of the Viaduct in relation with the surrounding urban fabric and how this changed over time following the changes within the social conditions of the town such as de-industrialisation leading to removal of mill buildings leaving leftover 'in between spaces.' within the urban grain. In Studio 1, a geometrical approach is taken inspired from the Bauhaus movement and Aldo Rossi to connect Accrington with the Viaduct by inhabiting and promoting pedestrian movement across the site by rediscovering lost routes. Moving on to Studio 2, the thesis project explores the constructuctivist movement which rejected decorative stylization in favour of the industrial assemblage of materials. Inspired by the geometrical cubist architecture with bold volumes projecting in and out and by modernist materials such as contrasting walls of glass and brick; the project aims to bring back the industrial footprint within Accrington signifying its industrial heritage and relinking disconnected parts of the town through a public square