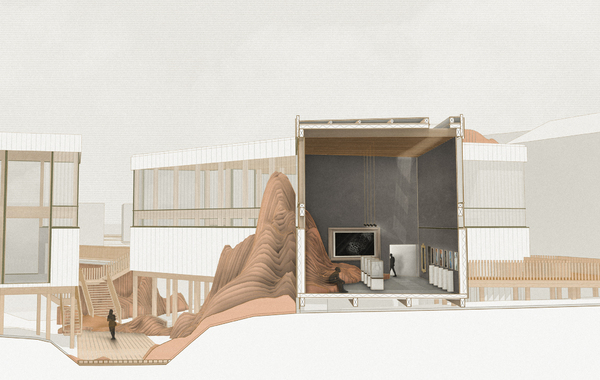 The Xeno-institute is a science research facility for the alien and the unknown. Home to the country’s leading researchers and scientific teams, it pushes the boundaries of exploring the definition of ‘life’ as we understand it.

The programme is split into two sectors: The Research Centre, which carries out preliminary examination of new ‘life’ forms; and The Exhibition Centre, which allows the public to learn about these discoveries in a highly immersive and experiential display.

As an extension of the study of the unknown, Physarum Polycephalum [slime mould] was employed as a non-human design agent, with the final design displaying influence from both the physical attributes and conceptual understanding of the organism. This can be seen extending through the site, connecting the landscape to the building itself in the form of a parametric timber sculptural element. Seemingly growing on the external façade of the building, its design refers to the manner in which Physarum Polycephalum moves throughout a landscape in search of decaying vegetation and bacteria to feed upon. Thus, the building is presented as an ‘alien’, found within a thriving ecosystem of natural species from the microscopic to the macroscopic.

Moving away from a human-centric approach to living, the building is designed to move humans upwards, giving the ground back to nature. Underneath, a natural landscape exists, full of habitats and safe from human disruption. It indicates a co-existence whereby humans and non-humans can have a natural and harmonious relationship.