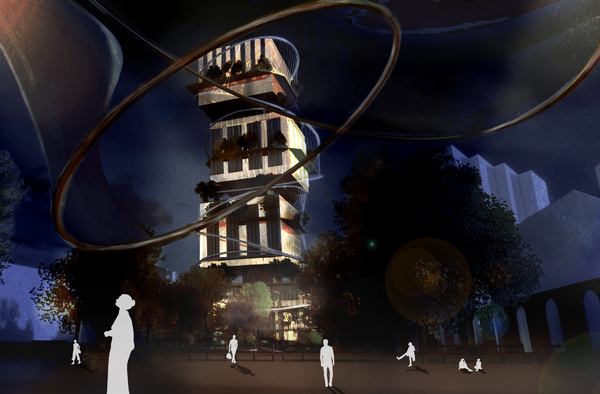 This high-rise project, located in the vibrant Ancoats, was designed and conceived as a 'scheme breaker'. High-rise buildings have noticeably been considered over the years as quite controversial, especially since the recent rise of the climate emergency agenda. They are often seen by many as disruptive and heavy structures that abruptly break off city's skylines. The idea behind this project was to break this wrong perception of towers, by creating an atypical 'light' tower. The term light within the project was mainly addressed in terms of visual lightness; creating the perception of a light-weight tower which appears almost to be floating at instances.

The entire development of the tower was centred around this main concept. The shaping of it was heavily influenced by a previous pavilion project undertaken in 3.1 and consisting of a 'floating' fabric pavilion. A process of disassembling and reassembling the pavilion into a tower led to the recognition of its main feature: the rings. The juxstanpunction of the curvness of the rings and the squareness of the building blocks was used to create a dynamic aesthetic for the tower. However, the rings were also conceived as more than mere aesthetic elements: they act as structural support for the building blocks (slightly shifted to maximise direct sunlight onto the work floors), providing them with a caging and lateral stability.

Whilst the exterior of the tower might appear quite extravagant, its interiors were kept quite rigorous to reflect their programme, post-covid office spaces. The office blocks were also designed to be intervalled by spaces of community interactions, the sky garden. The beauty of the project lies within the intricate balance of these two realms and their respective characteristics. 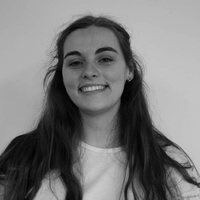