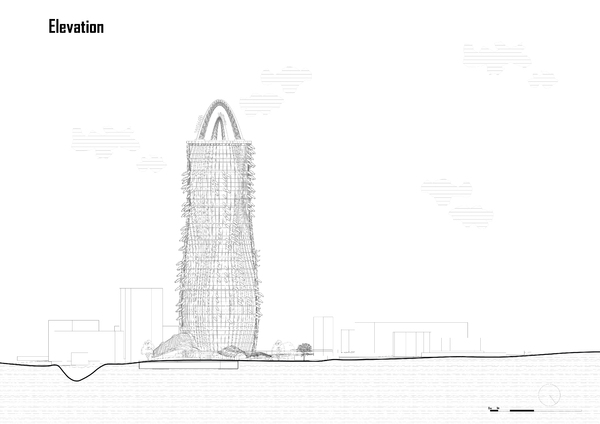 Nature, in its form, provides a refined source of already built compositions from which architecture can take inspiration. Much like a library, the surrounding environment houses a continuous stream of constructed, tested, and refined strategies of structure. The shown design emerges from nature’s mechanical backgrounds and has the intention to provide its end users with a space which not only fully embraces the concept of vertical gardens but also provides with an interactive space. The concept explores how a garden, or a greenhouse can find its place in the composition of a multi-story building. The existing materials found on the site proved to be an amazing imaginative tool from which my design began its explorative process in the 3.1 studio work. The availability of materials along with the intent to preserve the embodied energy through adaptive reuse were the first guidelines which shaped the first major steps in creating a response. The key feature which was later transcended into the current design is the shading devices which are situated on the outer skin of the building. Taking its form from a flower bulb, the units were initially designed to collect water for gardening and direct it from the ceiling to the farmed grounds. Now, the organic shapes which use glass reinforced concrete act as shading devices and solar panels. When opened, each ‘petal’ houses small solar panels which collect the energy from the sun, contributing to the use of energy the tower has. The terraced gardens along with the atriums which house green spaces form a passive ventilation system, improving the consumption of energy by cooling down the building. The shape of the core and the columns spread around it intend to resemble the appearance of roots, therefore providing the end user the experience of walking ‘inside a living plant’.