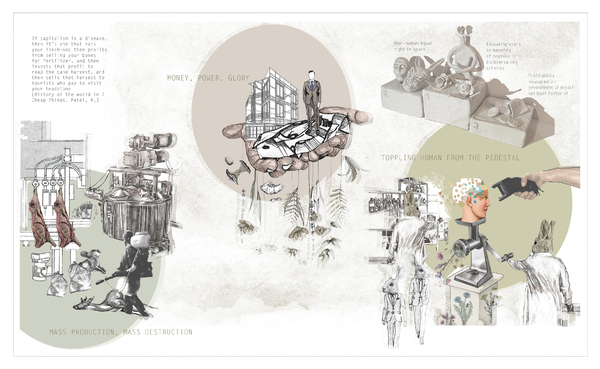 A Manchester base for the Rewilding Britain organisation

Rewilding Britain is an organisation campaigning for more biodiverse city spaces, educating the public on how they can rewild on a small-scale at home to help reintroduce and allow flora/fauna to thrive within a built environment previously neglecting them. This non-human perspective, alongside environmental conservation, is what the project takes inspiration from in giving an equal right to space by toppling humans from the pedestal as wildlife sentries [guards] and thus changing the way that non-humans are valued within space-planning.

The proposal looks to reimagine a former site of industrial food production operating on human exceptionalism - the Manchester Abattoir - for a sustainable future. This was approached using a site-wide rewilding landscape strategy as principle methodology for achieving sustainability regarding climate change through ecological restoration. The newly established landscape will act as precedent for how cities can incorporate low-maintenance but high-impact wild spaces and is thus fitting to sit beneath a new northern HQ for Rewilding Britain.

The proposition is a hybrid reuse/intervention scheme that retains existing Abattoir structures [following impact analysis of releasing the embodied carbon of these industrial concrete forms should they be demolished], using them as foundations for a light-weight canopied platform that is perched atop as well as being a sheltered home for flora/fauna to inhabit. Human circulation on site is controlled with canopy facets enclosing entrances to site, joining them directly to the lift tower-accessible platform that consists of Rewilding Britain offices and education spaces as well as artist studios, café/gallery and a nature observatory that overlook the biodiverse site floor. This allows for undisturbed non-human freedom on the ground footprint, the platform looming above an industrial ruin gifted back to nature. 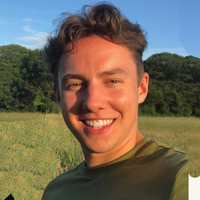