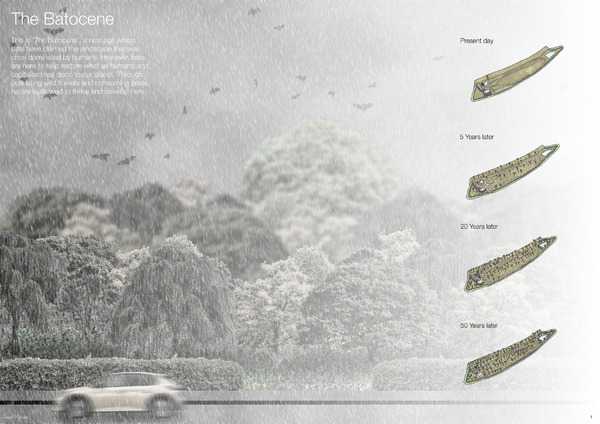 My project brings Mikhail Bakhtin’s concept of polyphony and Jason Moore’s discussions surrounding ‘The Capitalocene’ to the forefront, particularly concerning humans and bats. Due to the thriving of capitalism, much of the world’s green spaces have been commodified and mistreated. I want to change that.

The coronavirus has created misconceptions surrounding bats. Their contributions to the world’s green spaces have been vastly overlooked. My project focuses on creating a green space that caters for bats to thrive; as well as spaces that allow humans to educate themselves on why we need bats in order for the planet to thrive. At night, bats are free to hunt and pollinate the site, in an effort to restore our damaged green spaces. They will bring life to a site which used to be an abandoned abattoir, a site that once commodified death. Humans will not be able to interact with the site during this time, as bats are nocturnal animals.

In order for a thriving greenspace to be developed, most of the pre-existing structures have been demolished. The concrete from such has been collected recycled to renovate the limited structures that are kept. This provides a sustainable method to treating pre-existing concrete from the site.

At night, humans can stay at ‘The Visitor’s Centre’, which is a repurposed market place. There is accommodation set up, with linked rooms for families, and during the day there is a large library with linked study spaces. At night, there is an observation space overlooking ‘The Batocene’, acting as an educational space concerning how bats behave in nature, in order to debunk misconceptions. Inspired by Gothic churches, certain spaces are multifunctional and aim to attract bats. This is to bring humans closer to bats and to encourage successful human and non-human coexistence within our architectural environments. 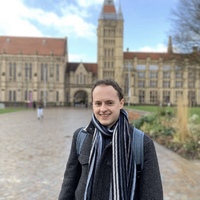