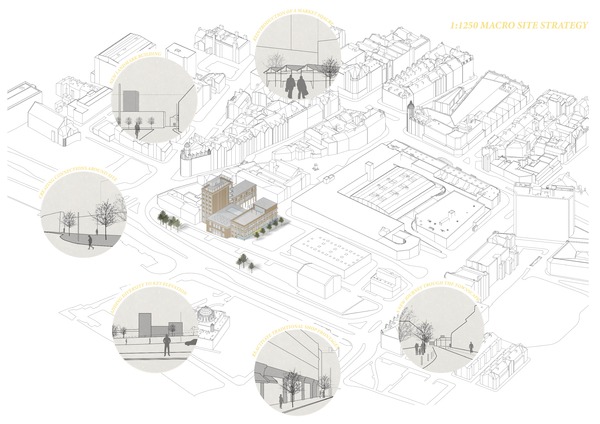 The past urban landscape of Bradford’s Top of Town was punctuated with thriving public squares hosting traditional market festivities, where local vendors could showcase goods intrinsic to the cities pioneering industries. Replaced in the 21st century by monotonous streets of chain retailers, this lost history of Braford contributed the regression of community engagement with the Top of Town. Reflecting on this, the narrative for my project was thus, to restore existing relics, reintroduce a functioning market square, and create building which instead of an acting as a solitary object works as part of the city, drawing users back to this underappreciated site and forging engagement with the city’s history.

The orthogonal form of the building was inspired by the market squares of Florence, Italy and developed throughout the course of the project to act as a city block, opening up pedestrian routes through the townscape along which the New Fountains Hall building is an essential node. This - along with addition of the tower at the North corner of the building, which visually connects the site to surrounding Top of Town context - secures the projects position as the newest cultural hub and entrance to the townscape.

A sandstone masonry outer leaf and exoskeleton of load bearing sandstone is a contemporary evolution of the 19th century architectural stylings of original portico entrance. The successful interface between new and old architecture is celebrated through the elevations; where at ground level the monolithic base grounds the new building within its context, and the lighted architectural language at roof level and across the market square is representative of the new ear of community activity at Fountains Hall. 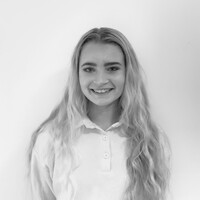