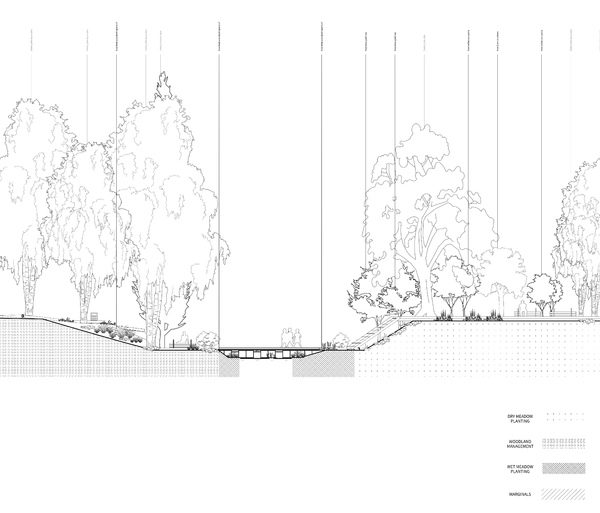 The Brickworks is situated in Levenshulme, Manchester between the former Jacksons Brickworks and the remains of the Levenshulme Goods Yard, two relics of the region’s industrial past. The site is bisected above ground by the former railway line now called the Fallowfield Loop (Floop), and below by the Fallowfield Brook, which flows entombed in darkness culverted underneath the bike path.

The design for the Brickworks was inspired by the thinking of Joan Iverson Nassauer’s ‘Messy Ecosystems and Orderly Frames’. The hard edges of the steel boardwalks frame the meadows created by the vegetation strategy and ecological interventions such as the nesting sites and the gabion dam. The ecological strategy was influenced by the philosophy of Giles Clément’s ‘Third Landscape’; some areas of the Brickworks are left untouched by anthropogenic influence and are restricted for non-human users only. The aim as far as possible was to enhance existing biotopes to encourage greater diversity and to leave human interventions to a minimum.

Drawing on key precedents including Schöneberger Südgelände Park by Group Odious and the Wet Meadow and Source of the River Norges by Agence Ter. The site embraces elevated steel boardwalks which allow visitors to experience different perspectives and atmospheres whilst at the same time protecting the vegetation beneath. The Fallowfield Brook is daylighted and runs again along its natural course. The gabion dam is a focus for the site. It creates a new woodland pond habitat which supports a multitude of different animal and plant species, whilst also providing a means of crossing the waterway. Modular benches of differing typologies provide places for rest and socialising, especially close to the busy junction between Floop and school. At night, red lighting illuminates the site, adding to the aesthetic and creating the least disturbance to the local bats. 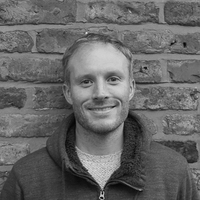