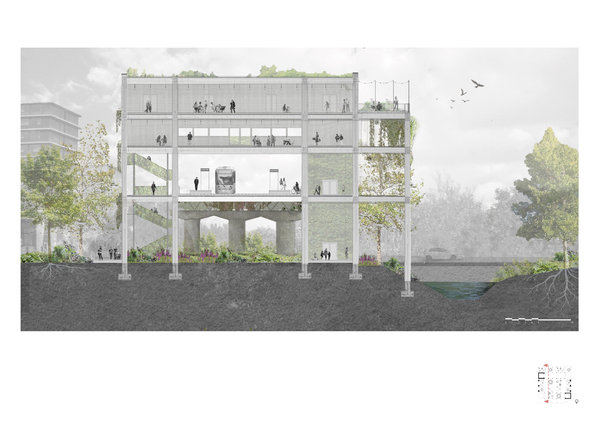 The London Road Interchange connects the divided city by implementing an eco highway of trams and bikes along The Mancunian Way, while softening the concrete boundary through re-wilding the space below, creating a hub for biodiversity.

The Interchange reconnects the residential districts of Ardwick and Hulme to the city centre by transforming the highway with a tram route along the length of the Mancunian way with three interchanges at London Road, Medlock Street and the Hulme Footbridge. Cycle lanes will run along the tram route with bike rental at London road and Hulme. Cars are reduced to a single lane of traffic on a limited stretch of the highway with parking options at London road to encourage people to use sustainable transport within the city.

A safe home for Manchester’s wildlife is created by re-wilding the underbelly of the Mancunian way, forming marshland park with the River Medlock which has been unculverted and extended around London Road. Timber planters integrated into the building provide habitats within the structure, while specialised planting to attract bees will not only increase biodiversity in the city through more cross pollination but also reinforce the cities sense of identity (the Manchester worker bee is one of the city’s most well-known icons, symbolising hard-work and unity).

The urban marshland park provides a space for the people of Manchester to relax and seek refuge from the busy city. While the cafe, restaurant and sky lounge in the interchange building offer space for people to meet and connect, with scenic views out over Ardwick. The inclusive activity of foraging of herbs and weeds at the ground level aims to immerse people in the natural world while involving them in the programme of the building. The foraged produce will be incorporated into the foods and drinks available at the cafe, bar and restaurant.