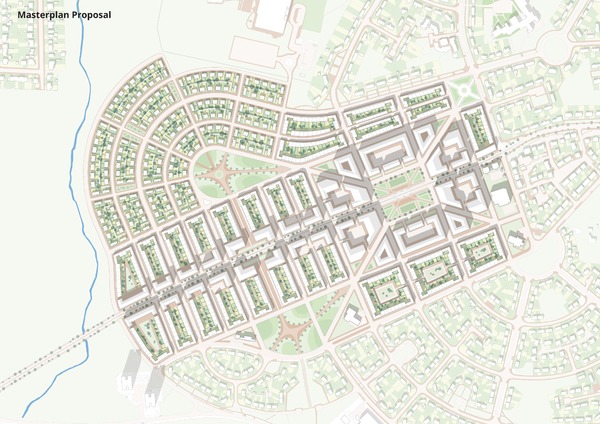 Utilizing the New Urbanism Theory by Peter Katz the aim of this project is to reverse many of the critical issues plaguing our time contributing to the decline in our cities resulting in disintegrated infrastructure, poor housing affordability, high crime and high traffic congestion and attempting to return to a compact, close-knit, community orientated model. Katz believes it was the introduction of the automobile along with a host of other factors that provided opportunities for people to rapidly disperse out of our congested cities and into to the poorly designed suburbia districts that we see today. He believes this is what has led to isolation, congestion and rising crime resulting in the fragmentation of societies – separating friends and relatives and “breaking down the bonds of communities,” of which the devastating consequences were disregarded for some time. The intention of the New Urbanism, and this project proposal is to suggest alternatives to the present Urban sprawl and isolation. The design model integrates workplaces, shops, housing, parks and civic facilities into close-knit communities that are both “charming and functional” and seeks to revive the public realm, which is being increasingly privatised.

Leeds was the city of choice for this project as in recent decades it has experienced exponential growth from an agricultural landscape, to an industrial city and then into a multifunction modern urban environment of the commercial, digital age. Leeds however has reached the physical extents of it urban sprawl and therefore is required to consider its urban development from within its current boundaries. Leeds is a culturally diverse city, with a strong Yorkshire Identity formed from being a Northern Powerhouse, a University city and a cultural hub of sports and The Arts meaning the combination of the social and physical contexts produces lots of constraints and opportunities for its future development.

This project primarily involved the implementation of a Transit-oriented development (TOD) model across Leeds which is an urban development concept that seeks to develop high density mixed-use commercial and residential buildings centred around a transportation hub, all connected through a well-integrated and easily accessible public transportation system which encourages public transit ridership while decreasing demand for the automobile. This was done by introducing new tram services, bus services, train stations and historic train lines to provide comprehensive coverage of the currently very deprived and isolated neighbourhoods within the city. This enhanced transportation system will maximise connectivity and will integrate the regions together once more, addressing the city’s problematic fragmented societies and providing everyone with opportunities for better access to the labour market, education and healthcare etc. This in turn will reduce crime, economic inactivity and benefit claims transforming all neighbourhoods in Leeds into functional and sustainable urban locations.

This project then focused in on the redevelopment of one of these previously isolated neighbourhoods which is centred around one of the new transportation hubs. The designing of the neighbourhood around this TOD network involved the strict use of traditional town planning principles (TND) to assure the development will be compact, walkable, mixed-use, affordable, of an appropriate size etc.