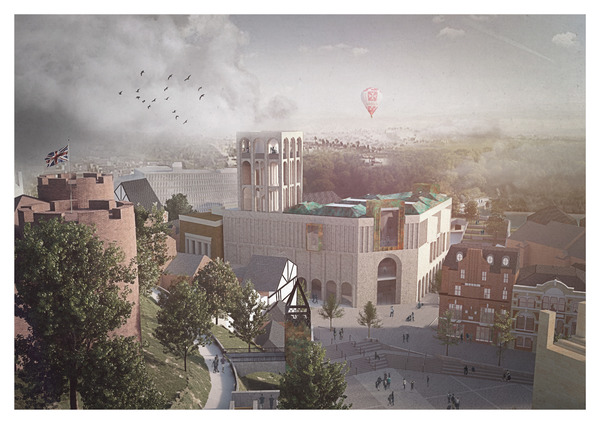 The thesis analyses and proposals –  a new town Gateway comprised of three public squares, each accommodating an architectural element - a museum building, an urban lift and a green bridge - demonstrate how notions of ‘undoing’ and ‘rewriting’ within sensitive areas can provide solutions to urban problems formed from years of neglect and bad planning. These sensitive areas are what we call ‘architectural palimpsests’. The thesis reveals that a considered approach to ‘undoing’ can enrich and activate a space and its history through rewriting elements that diminish the quality of the given space. The proposal demonstrates that through undoing and rewriting after theoretical interrogation, rich layers of history manifested in the urban grain, can prevail; coexisting in the present to celebrate Shrewsbury’s historic identity.

The Gateway
+ West, a proposed Green Square responds to a wooded nature trail and river which it bounds. Terracing upwards, it connects to the wider town outside of the river via a wide pedestrian green bridge.

+ East, bounded by the station and castle, an existing carpark is rewritten as a sunken square giving priority to the pedestrian. Stripped back in design, its purity lends to a ceremonial function serving to celebrate a neighbouring castle and train station. Its articulation is given by its materiality; various cobble types from various periods of Shrewsbury’s history are separated by concrete paths informed by the castle geometries and desire lines. An urban lift whose form reflects the town’s skyline resolves the convoluted circulation of the area.

+ Centrally, existing road infrastructure has been rewritten as a third square connecting the two either side. Undoing a fragmented cluster of buildings created a building plot which can bound this new square, converse with its context, and functionally activate the proposed gateway. A proposed Museum echo the layered history and civic qualities of the surrounding context. 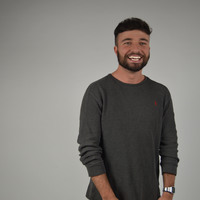