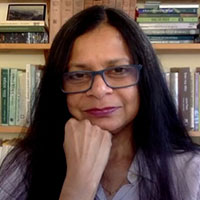 She received her PhD in Architecture from the University of California, Berkeley. Trained as an architect and an architectural historian, she specializes in modern architecture and urbanism, and the cultural landscape of the British Empire.

Chattopadhyay is the author of Representing Calcutta: Modernity, Nationalism, and the Colonial Uncanny (Routledge, 2005; paperback, 2006); Unlearning the City: Infrastructure in a New Optical Field (University of Minnesota Press, 2012); and the co-editor with Jeremy White of City Halls and Civic Materialism: Towards a Global History of Urban Public Space (Routledge, Taylor and Francis, 2014); and Routledge Companion to Critical Approaches to Contemporary Architecture (Routledge, Taylor and Francis, 2019). She has published in over 30 journals in English and Bengali, contributed to 15 anthologies, and edited 14 journal volumes. Her forthcoming book is titled, Small Spaces: Recasting the Architecture of Empire (Bloomsbury Academic Press, 2022).

Her fellowships and grants include a Guggenheim Foundation Fellowship, three fellowships from The American Institute of Indian Studies, a J. Paul Getty Fellowship, and a National Science Foundation Grant. In addition, she has held residential fellowships at the Swedish Collegium for Advanced Study, Queen Mary, and Birkbeck Institute for the Humanities, University of London. She has served as a director of the Subaltern-Popular Workshop, a University of California Multi-campus Research Group, and as the editor of the Journal of the Society of Architectural Historians. In 2018 she was named a Fellow of the Society of Architectural Historians for a lifetime of significant contribution to the field, the youngest fellow to be bestowed this honour. In 2019 she co-founded and co-created PLATFORM, a digital venue for critical conversations on the built environment at large.

Her current research includes a book project funded by the Guggenheim Foundation, Nature’s Infrastructure: British Empire and the Making of the Gangetic Plains, 1760-1880, that analyses the mutually constitutive relation between the Gangetic plains of northern India and the British empire. It focuses on the process through which information about the land was collected, represented, and utilized to build the colonial administrative, trade, and military infrastructure, specifically the manner in which cartographic and hydrological projects shaped the land, inaugurating new ways of seeing the plains in aesthetic and productive terms.

Chattopadhyay is also PI of two digital humanities projects on Calcutta/Kolkata: Mapping the Ephemeral concerning the Durga Puja festival in Kolkata, and Bookscapes that investigates the literary milieux of colonial Calcutta.