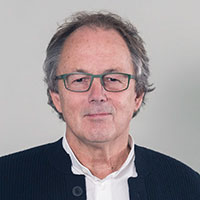 Paul formed Stanton Williams with Alan Stanton in 1985. As founding directors they have been responsible for the creative direction of the practice since its inception. Paul is actively involved with the strategic design development of the studio’s projects, which have won over 100 national and international awards, including the 2012 Stirling Prize.

The practice has developed its portfolio from an initial focus on museums and galleries towards a wide variety of projects, all of which demonstrate its overarching objective of putting the user’s experience of space, light and materials at the forefront of the agenda, as well as creating places that sensitively respond to their cultural, social and physical context.

Paul's work has been shaped by his passionate belief in the integration of art and architecture. Throughout his career he has championed the importance of the arts within our education system, campaigning for greater focus on interdisciplinary thinking. He was on the founding UK Council of the Creative Industries Federation, which supports and champions the UK’s creative industries in their multiple forms and is a member of the RIBA Public Education Committee.

After graduating from Birmingham College of Art and Design in 1974, Paul joined the Victoria and Albert Museum Design Department, leading the studio from January 1974 until October 1979 as Assistant Keeper, during which time he was awarded a Fulbright research grant to study Museum and Gallery Design at Yale where he studied in 1978. In 1980, he set up his own London based practice ‘Paul Williams Design Studio’, designing permanent and temporary exhibition installations for a number of the world’s foremost museums and art galleries, before setting up in practice with Alan Stanton in 1985.

The studio’s projects span an exceptional range of building types - and many of which have involved collaboration with artists - include the Museum of London at West Smithfield, the Royal Opera House, UAL campus for Central Saint Martins at King’s Cross, the Sainsbury Laboratory in Cambridge, Compton Verney Art Gallery, the Millennium Seedbank and the practice’s many exhibitions and museum installations.

Paul has been an architectural advisor to the Heritage Lottery Fund, CABE and the Royal Borough of Kensington and Chelsea, and is currently on the fabric advisory panel of St Paul’s Cathedral. He has also been a trustee of Space Studios and the Whitechapel Art Gallery. Paul has lectured regularly at various universities and institutions both in the UK and abroad – (including the AA, RCA, Kingston, Cardiff, Birmingham, Nottingham, Sheffield, Ravensbourne, Canterbury, Mackintosh, Yale, and Porto) as well as acting as an external examiner for a number of architecture schools in the UK – (including Westminster, Plymouth, Dundee and Birmingham.)

Paul was the first design trained British architect to be registered by the ARB (Architects Registration Board) in 2002 and he became a member of the RIBA in 2002. He was awarded the title of Royal Designer (RDI) in 2005 for sustained excellence in design throughout his career and received an honorary doctorate from University of the Arts London in 2012. He received an OBE for services to architecture in 2014.