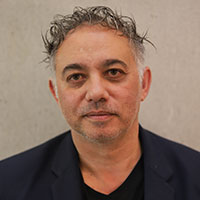 Head of Manchester School of Architecture

He is a Chartered Architect with a career in higher education that spans over 25 years which includes leading a BA Interiors and M.Arch course. His Professorship was conferred under the categories of Learning and Teaching and Academic Leadership and was also awarded a National Teaching Fellowship in 2015, which led to a spell as a Visiting Professor at the Pratt Institute in Brooklyn, New York.

He is a very active member of the Royal Institute of British Architects (RIBA) having been a member of the Education Committee since 2014, a term on RIBA National Council, tutoring for RIBA Studio, as well as numerous roles at RIBA West Midlands. He also have extensive experience as a Chair of RIBA Visiting Boards both in the UK and Internationally and is also a member of SCHOSA Council and was previously on the Commonwealth Association of Architects executive committee. He is currently an External Examiner for BA Interior Architecture and Design at Sheffield Hallam (including their franchise course in Malaysia) and will be starting at the Mackintosh School of Architecture this academic year. He was previously an External Examiner at University of Nottingham and London South Bank. He has also worked with a number of Schools as a critical friend either in preparation for RIBA visits or for course approvals, including Ulster University, University of Swansea, Robert Gordon, and Ravensbourne, as well as with Ulster, UWE, and Northumbria on reviewing senior academic promotions.

Away from University he is currently a member of the Birmingham Civic Society Planning Committee and a Trustee/Board Member of danceXchange a community facing contemporary dance organisation.