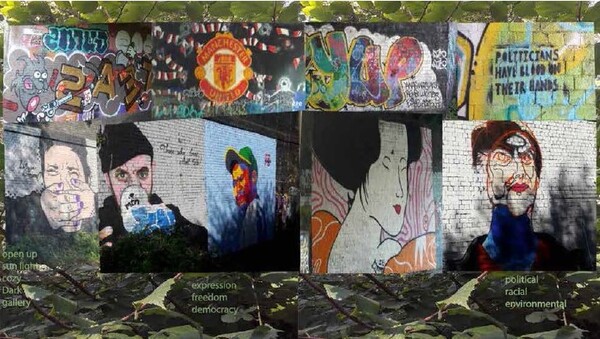 My project was inspired by the political graffiti in the Fallowfield loop and how can urban spaces relate to politics and free speech which in this case is graffiti. Through my research I analysed public squares, protests and the relationship between urban spaces and social expression which led me to the idea of creating a democratic space for the people to reclaim and be expressive without limitations or surveillance.

My definition of a democratic space is a space that is not surveilled or monitored and can be accessed by everyone without restrictions.

The idea behind reclaiming the floop is to create a space for the people and for free speech that can be expressed through art, graffiti and music performances and public speaking. However, democracy is not only for the people but also for the habitats and vegetations that exist there which is why I’ve created two sides of the project, A democratic platform square and an ecological space for new habitats to reclaim and coexist. This will encourage people to respect nature and look at it from a new perspective.

The democratic platform is linked to the residential area on the opposite side through pathways which is going to promote an active lifestyle and encourage more people to feel free to claim those spaces instead of fearing them.

2-An ecological space and a rain garden for new habitats

The rain garden is meant to enhance the air quality in the floop and introduce new habitats in the steepest parts of the floop near the existing brook, it can also be used as an outdoor learning experience for the schools around the area.