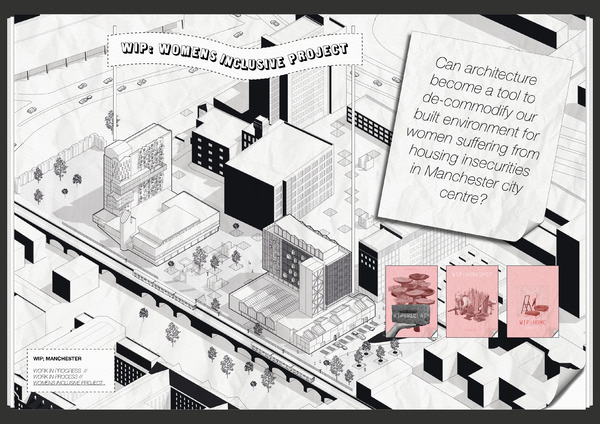 The Womens Inclusive Project (WIP) intends to start a network as a work in progress, focusing on women to create a series of spaces where manual labour skills can be learnt, wider employment gained, and safe, communal housing can be accessed.

From initially exploring my personal connection to architecture and passion for retrofit and reuse, I explored the people who are affected by the redevelopment of existing areas in Manchester and the role that meanwhile use, squatting and homelessness plays. Women are considered the ‘hidden homeless’ due to dangers exhibited on the streets, and the inequality in the income:rent ratio is significant in leading to housing insecurities. This conflict encouraged a political stance that must be addressed and a research question to interrogate, inspired by the squatting handbooks from the 1970’s:

Can architecture become the tool to de-commodify our built environment for women suffering from housing inequalities in Manchester?

This project at the former UMIST campus in Manchester is made up of WIP:Reclaim, WIP:Workshop and WIP:Home. The site has been earmarked for redevelopment by UoM to become the innovation district in the city which could see it demolished and commodified. The ‘WIP’ proposes to retain the carbon heavy concrete structures through retrofit where the deconstruction of materials and sustainable recladding which offers both individual and collective ownership as key.

Salvaged architectural materials can be brought to site and begin the process from reclamation to cataloguing to storage before being used by the students in the construction workshops to gain skills. These skills can then be implemented into the housing scheme where the internal configuration can adapt to suit the new resident and her needs. Further promoting principles of the circular economy in all aspects of the project, the buildings feature unprogrammed spaces to ensure flexibility and futureproofing.