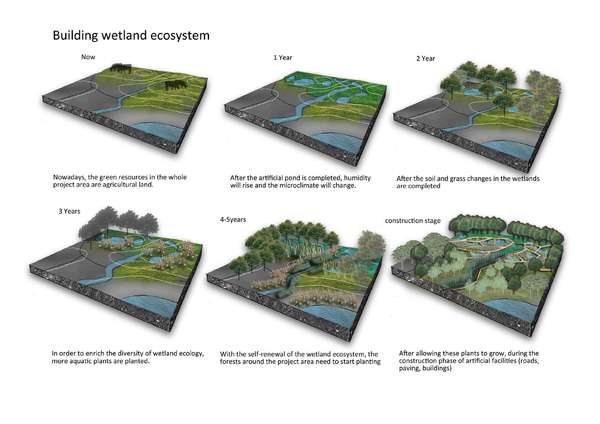 As the climate changes, rain falls in shorter, more intense periods, and the threat of flooding increases. Millom is a town and civil parish on the estuary of the River Duddon, west of Barrow-in-Furness. Flash floods, caused by a large amount of localised rainfall, exceeding the design capacity of the drainage, have become increasingly common.

Nowadays, the landcover typology in the area is dominated by improved grassland, used for arable farming. On the coastline, there is a small area of valuable salt marsh. Due to long-term grazing, the grassland in the region has already experienced soil degradation. If we do not diversify the ecological environment of the site, the soil nutrient loss will be more serious.

We have the opportunity to use the rainfall here to create a wetland, which will function as a water storage area, and work as a flood buffer. A wetland ecosystem will reduce the risk of flooding in Millom and, at the same time, help the rewilding of grazing land. The reintroduction of woodlands and wetlands will bring a greater ecological equilibrium back to this area.

A new system of constructed wetlands will not only bring significant benefits to the flood resilience and ecological diversity of the area, but also transform the local economy. Despite the proximity of the Lake District, tourism to Millom is minimal. The proposed wetland ecology park will provide a new tourism attraction as well as greenspace amenity for the local population.