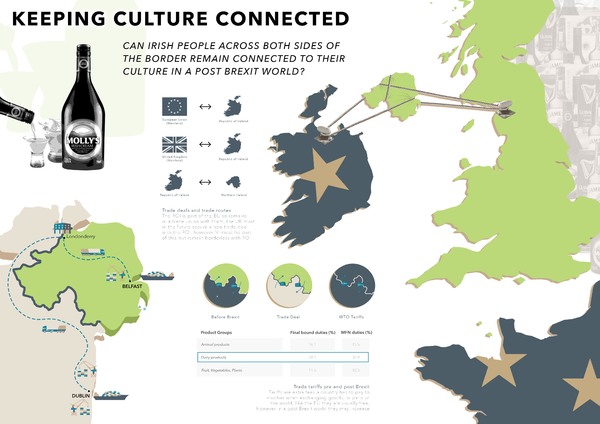 The Irish Border, Brexit and culture

My 3rd year project began with the focus on how the Irish border between the Republic of Ireland and Northern Ireland (UK), will possibly become affected by the outcomes of Brexit. Looking at trade deals, routes and tariffs I chose the idea of having a cross border spanning factory that allows distribution from trade to be accessed in and out from both countries on either side of the border, but with just one factory and brand, allowing Irish populations on both sides of the border, and across the world, to have an equality on Irish products that are a part of their culture.

After developing this initial thesis and research, I created a manifesto for the factory, one in which must meet the requirements I set out, to allow cultural equality through trade routes, as well as taking a current Irish cream producer to focus on as my product and manufacturer, putting their needs, such as the environment and worker wellbeing, at the heart of the next stage of the brief and design development.

I then created the final design, with a public cultural arm that links two stages of production, mixing and bottling. The public arm consists of ideals that are important to Irish culture, culminating with the pub and music lounge at the heart of the design, right on the border. This space links every aspect of my design together. Furthermore, the form of the building and its structure is developed through the environment, with the floor levels following the contours and the roof flowing with the curves of the ground. The plan is based from the fluid dynamics of the site and its water content. 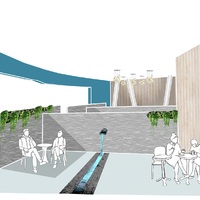