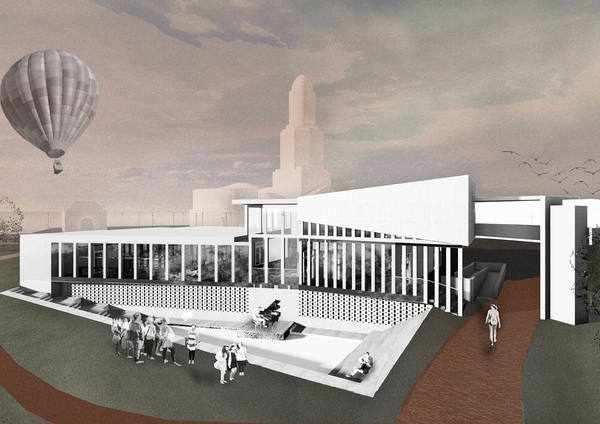 This project looks to reform the existing Shrewsbury Library and Town Council as one merging hub for community services functioning in the same space. The building is divided into private spaces for the council offices and public area with programmes such as the library, cafe and outdoor performance space. Bricks as the main facade and structure materiality resonate with the surrounding buildings in context.  The linings of glass panels on the exterior facade camouflage the building as if it is ‘hidden’ and reflects the appearance of the surrounding context. Echoing the title, the building is veiled and the surrounding is revealed. An outdoor performance space extended on the site provides an alternative programme for events frequently held in the Quarry.

As part of the building strategy, a perforated brick facade is adopted to allow a minimal yet very optimal coverage of the west sunlight whereas the installation of skylights on the ground floor will bring in the natural sunlight and illuminate underground spaces. During summer, hot air is regulated through the implementation of a heightened ceiling by allowing the escape of hot air to lower the building temperature. In terms of the structure, the steel frames helped to support the street level above for the area under the ground as well as the weight of the building itself.

The new hub provides a new transitional point for the communities and facilitates urban activities as well as promoting the importance of preserving the natural environment.